Articles and research on rising sea levels, Miami and more:

“The fight against climate change: four cities leading the way”

New York City, Houston, Miami and San Francisco have all taken steps to mitigate the risks associated with rising sea levels and global temperatures. Are their successes a blueprint for action at the state and local level? by Richard Luscombe in Miami https://www.theguardian.com/cities/2017/jun/12/climate-change-trump-new-york-city-san-francisco-houston-miami

Miami Beach likes to bill itself as a poster child for the effects of climate change. Flooding from each successive year’s King Tides reaches farther inland and affects more homes, businesses and livelihoods, and the waters lap ever higher toward environmentalists’ dire predictions of a 5ft rise in sea levels in south Florida by 2100. So to Philip Levine, the outspoken mayor of the low-lying coastal city, Trump’s unilateral withdrawal from the Paris agreement was nothing short of “a colossal mistake”.

“It’s a punch in the gut for all of us who on the ground are experiencing this threat first-hand,” said Levine, who has overseen his city’s investment of hundreds of millions of dollars to raise roads and sea defences and install modern and powerful pumping equipment.

“It’s like being on a boat and the next thing you know the entire current has gone against you, but you know you still need to go in the right direction. For all of us who are experiencing climate change and sea level rise, we have no choice but to continue forward.”

Levine was a signatory to the defiant open letter to Trump signed by more than 1,200 mayors, governors and education and business leaders pledging to abide by the terms of the Paris accord, and has promised to press ahead with Miami Beach’s ambitious works programme. 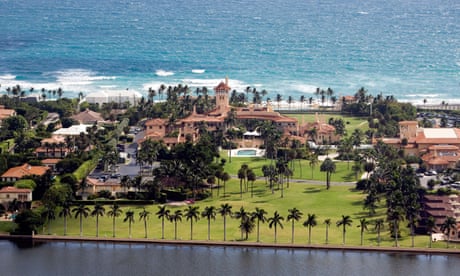 With partners including four south Florida counties who in 2012 formalised their own regional action plan to combat the effects of climate change on their collective population of 6 million, the city’s own efforts pre-date the Trump administration by several years – and will long outlast it, Levine insists. “Our priorities are the low-lying areas of our city, the western part of the island,” he said. “We’re building up those areas, putting in the pumps, and we have seen significant, incredible success. Now we’re going to other parts of our city, other places that are also low lying and we need to raise.”

Demand and financing could collapse before the sea consumes a single house.

by Christopher Flavelle
Bloomberg: April 19, 2017 https://www.bloomberg.com/news/features/2017-04-19/the-nightmare-scenario-for-florida-s-coastal-homeowners
“On a predictably gorgeous South Florida afternoon, Coral Gables Mayor Jim Cason sat in his office overlooking the white-linen restaurants of this affluent seaside community and wondered when climate change would bring it all to an end. He figured it would involve a boat.”

“One reason is that water levels here are rising especially quickly. The most frequently-used range of estimates puts the likely range between 15-25cm (6-10in) above 1992 levels by 2030, and 79-155cm (31-61in) by 2100. With tides higher than they have been in decades – and far higher than when this swampy, tropical corner of the US began to be drained and built on a century ago – many of south Florida’s drainage systems and seawalls are no longer enough. That means not only more flooding, but challenges for the infrastructure that residents depend on every day, from septic tanks to wells. “The consequences of sea level rise are going to occur way before the high tide reaches your doorstep,” says William Sweet, an oceanographer at the National Oceanic and Atmospheric Administration (NOAA).

The flooding would be a challenge for any community, but it poses particular risks here. One recent report estimated that Miami has the most to lose in terms of financial assets of any coastal city in the world, just above Guangzhou, China and New York City. This 120-mile (193km) corridor running up the coast from Homestead to Jupiter – taking in major cities like Miami, Fort Lauderdale and West Palm Beach – is the eighth most populous metropolitan area in the US. It’s also booming. In 2015, the US Census Bureau found that the population of all three counties here was growing – along with the rest of Florida – at around 8%, roughly twice the pace of the US average.

Recent studies have shown that Florida has more residents at risk from climate change than any other US state.It has more property at risk, too. In Miami-Dade County, developers had 1.6 million sq ft (149,000 sq m) of office space and 1.8 million of retail space under construction in the second quarter of 2016 alone. Sunny Isles Beach, home to 20,300 people, has eight high-rise buildings under construction; swing a seagull in the air, and you’ll hit a crane. As you might imagine, the value of development in this sun-soaked part of the country is high, too. Property in Sunny Isles alone is now worth more than $10 billion. Many of the wealthiest people in the US reside in Florida, including 40 billionaires on the Forbes 400 list of richest Americans; on a recent week, the most expensive real estate listing in the US was a $54 million mansion in Palm Beach.”

“Harewood had a realization, one that he illustrates with his hands. One hand represents the city of Miami Beach. The opposite hand, moving like the incoming tide, demonstrates how the seas will eventually rise, potentially bringing the coastline of South Florida closer to Miami’s historically black neighborhoods — properties like his investments in Liberty City that sit on comparatively higher ground.

“Oh, Miami Beach is going under, the sea level is coming up,” Harewood said. “So now the rich people have to find a place to live. My property is 15 feet above sea level, theirs is what? Three under?

“So OK,” he said, taking on the voice of a rich developer, “let’s knock down the projects, and we move in and push them out.”

With Miami Beach set to break ground this year on the most ambitious piece yet of its aggressive anti-flooding project, some homeowners worry that raising streets to keep them dry will cause flooding on their properties.

The city will embark on a $100 million project to raise roads, install pumps and water mains and redo sewer connections during the next two years across a swath of single-family homes in the La Gorce and Lakeview neighborhoods of Mid-Beach. A sizable chunk of a citywide effort estimated to cost $400 to $500 million, the work is meant to keep streets dry in the face of sea level rise.

“The real estate data firm Zillow recently published a research analysis that estimated rising sea levels could leave nearly 2 million U.S. homes inundated by 2100, a fate that would displace millions of people and result in property losses in the hundreds of billions of dollars.

More than 100,000 of those homes would be in Maryland and Virginia, according to the analysis. Another 140,000 would be submerged in the Carolinas. And Florida would face the gravest scenario of any state, with one in eight properties in danger of being underwater.”

What two meters (around 6.5 feet) of sea level rise would look like in Miami. Areas covered in blue are considered below water level. (Climate Central)

“In a groundbreaking climate change study, scientists have found that by neglecting to include the melting of Antarctica, we have vastly underestimated the potential for sea level rise over the next 80 years — and beyond.

The most widely cited estimate of around three feet by 2100 includes sea level rise from thermal expansion (water expands when it warms) and the melting of smaller glaciers. It includes minimal contributions from Greenland and Antarctica.

In the Miami area, the daily high-water mark has been rising almost an inch a year.Illustration by Jacob Escobedo

“THE SIEGE OF MIAMI

As temperatures climb, so, too, will sea levels.”

“The city of Miami Beach floods on such a predictable basis that if, out of curiosity or sheer perversity, a person wants to she can plan a visit to coincide with an inundation. Knowing the tides would be high around the time of the “super blood moon,” in late September, I arranged to meet up with Hal Wanless, the chairman of the University of Miami’s geological-sciences department. Wanless, who is seventy-three, has spent nearly half a century studying how South Florida came into being. From this, he’s concluded that much of the region may have less than half a century more to go.”

By century’s end, rising sea levels will turn the nation’s urban fantasyland into an American Atlantis. But long before the city is completely underwater, chaos will begin.

“Say goodbye to Miami and New Orleans. No matter what we do to curb global warming, these and other beloved US cities will sink below rising seas.”